A Gathering of Ghosts and Demons: Generosity and Realization in Tibetan Buddhism


Show me a culture without ghosts and spirits, and I’ll show you an alien culture—something not of this Earth—because stories of things spooky and strange, seen and unseen, are found everywhere, in all belief systems. And the explanations of such haunting phenomena are as varied as the cultures that give birth to these magical stories.

The banshees of Ireland and the Scottish highlands, who warn families of impending death with otherworldly cries and laments, are thought to be the ghosts of women who died in childbirth. The Japanese yurei, also female ghosts, are trapped by powerfully gripping emotions in an intermediate state between life and death. In the Voudon tradition of Haiti, zombies are acknowledged to be reanimated corpses brought back to a kind of life by skilled magicians. And of course, there are the countless stories of vampires who suck the life force from their victims—perhaps a reflection of the universal experience of being around people who drain us of our energy?

So it comes as no surprise that the world of Tibetan Buddhism is populated with its share—if not more than its share!—of ghosts, demons, ghouls, and otherworldly beings. What is different in the Buddhist tradition, however, is the explanation of these phenomena.

One of the best windows into the sometimes-spooky world of Tibetan Buddhism was opened to us by the Tibetan woman, Machik Labdron (or Machig Lapdron), who lived in the 11th century.  Machik, whose name means “One Mother,” fused the Indian Buddhist tradition of chod with her own visionary experiences to create a special practice, the Chod of Mahamudra.

The most spectacular part of the practice, lu jin or “charity of the body,” is an eerie visualization that involves offering one’s own body as food for worldly and otherworldly beings—an extreme, supreme act of generosity. The aims of the practice, however, are eminently practical:  to benefit other beings and to overcome the self-fixation that Buddhists hold to be the source of so many of our problems.

Machik herself is a magical being, a wisdom dakini—a human embodiment of the essence of enlightened mind. And her popularity in modern times begins with a ghostly story. Here is how Tsultrim Allione, the author of Women of Wisdom who has recently been recognized as an emanation of Machik Labdron, describes one of her first experiences with this dakini.

…I was in California at a group retreat given by Namkhai Norbu Rinpoche. One night we were doing the Chod practice, and at a certain point, when we were invoking the presence of Machig, visualizing her as a youthful white dakini, a wild-looking old woman suddenly appeared very close to me. She had grey hair streaming up from her head, and she was naked, with dark golden-brown skin. Her breasts hung pendulously and she was dancing. She was coming out of a dark cemetery. The most impressive thing about her was the look in her eyes. They were very bright, and the expression was one of challenging invitation mixed with mischievous joy, uncompromising strength and compassion. She was inviting me to join her dance.  Afterwards I realized that this was a form of Machig Labdron.1

Machik advises us that the best places to practice chod—also known as severance, as in severance of self-fixation—are the wild and haunted places that create an atmosphere of isolation and fear. Among the guests we invite to the practice are more than a few terrifying apparitions.

Who among us would not be frightened by the antagonizing enemies, those “unembodied gods and demons who manifest sights and various weird apparitions to the eyes and cause fear and terror and then alarm and horror, with trembling and hairs standing on end”?2

Who wouldn’t feel intimidated by the body demon, an entity that connects with us in the womb and remains with us until our skin and bones separate after death? “It is the lord or owner of this outcaste body made of flesh and blood, a vicious inhuman spirit that says, ‘This is I,” Machik explains. “That bad spirit leads us around by the nose and makes us engage in bad karma.”3

Which of us would not be chilled by contact with nagas, snake-like animals who inhabit waterways and springs, or the eight classes of gyalsen, male king spirits and female demonesses who together symbolize attraction and aversion, two of the Buddhist poisons?

Who wouldn’t be scared silly by the sight of various male and female devils, planetary spirits, death lords, harm-bringers, belly-crawlers, personifications of types of disease, lords of epidemics, and black magic spirits?

And perhaps many of us have felt the unease that comes from bad spirits of haunted places, those spirits who dwell in unsettled places where we may visit or live.

But if we could help them, who among us would fail to offer sustenance to all sentient beings, from beings in hell where they experience unimaginable torture, through the realm of the hungry ghosts—with their huge bodies and tiny throats that deny them the sustenance they crave—up through the animal and human realms to the realms of the gods?

All these frightful and awe-ful beings, and more, are the guests Machik Labdron urges us to invite to the feast of severance.

This emphasis on demons and ghouls in Machik’s practice is no accident—it’s quite deliberate, because directly facing what terrifies us is one way we can awaken from our ignorance, one way we can realize the unbounded wisdom and compassion that are our birthrights as beings who possess, hidden deep in our hearts, the very same nature as the buddhas.

There is a famous story about Milarepa, another Tibetan Buddhist saint who was, coincidentally (or not!), a contemporary of Machik Labdron’s.

Tseringma and her four sisters were female deities. When they first met Milarepa they tried to scare him and they did all kinds of magic tricks to try to frighten Milarepa, but Milarepa was never frightened. He knew that these demons were like demons in a dream when you know you are dreaming. He did not take them to be truly existent and so then they were so impressed with Milarepa that they developed faith in him. They became his students; they became his Dharma Protectors, the protectors of his teachings and they also offered Milarepa siddhis, special powers…

In the end, in fact, there is no such thing as a demon. That is what you recognize in a dream when you dream of a demon and you know you are dreaming. You recognize that there really is no demon there. That is the ultimate nature. There is neither any deity that helps you nor any demon that harms you. Sometimes these supernatural beings are called god demons because if they like you they are like a god and if they do not like you they are like a demon. They can decide. But when you recognize you are dreaming it does not matter what they appear to be. You know their true nature.4

So in the Vajrayana—the form of Buddhism taught in Tibet—we learn that the appearance of demons and ghouls, when not seen through, is a mara or obstacle to enlightenment. Seen through—when we experience our minds directly—these same demons and ghouls become protectors (dharmapalas) and sources of spiritual powers (siddhis) and realization.

The appearance of demons and ghouls is, finally, revealed as nothing other than the self-projection of our own minds.

How precious now the idea of seeing a ghost.
It reveals the unborn source, how strange and amazing!6

So this Halloween—when numerous ghouls and devils and demons and ghosts appear at your door—recognize these frightful sights as reminders of your own mind’s clarity and spaciousness. And then—in the generous spirit of Machik Labdron and Milarepa—offer them some candy. 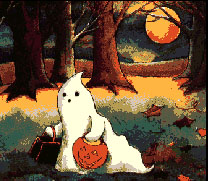 Karma Norjin Lhamo is a student of teachers affiliated with the Tibetan Karma Kagyu lineage. She has recently had the good fortune to attend a series of teachings about Machik Labdron given by her refuge lama, Khenpo Karthar Rinpoche, at Karma Triyana Dharmachakra in Woodstock, New York. Halloween has always been her favorite holiday. She urges people who are interested in learning about Buddhism to seek out a qualified teacher.