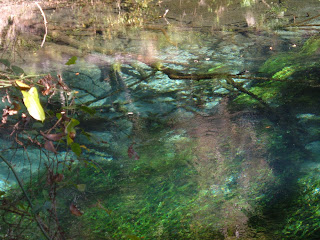 Early yesterday morning, I went down to the spring where I make offerings to the naga on the days when nagas are supposed to be active, according to the Tibetan Buddhist spiritual tradition that I follow.

I was greeted by a hawk upon my arrival. S/he appeared to be hunting squirrels in the woods next to the parking lot. I always feel uplifted when I see a hawk because my mother's maiden name was "Faulkner" so there must have been a falconer in my ancestry way back when. 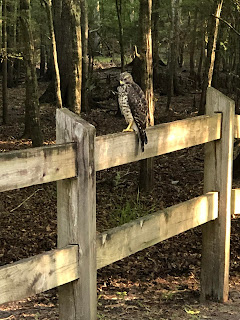 The spring where I make the offering has been browned out by high river water for a long time. We had a lot of rain last year and the nearby rivers all reached various flood stage levels. I was happy to see that the spring had cleared up, so I could wade into the water to pour the offering. I don't like going into brown water where I can't see what's around me because I've seen snakes swimming in that spring and I know they're there.

I hadn't been able to see the actual boil of the spring for many months, the spot where water bubbles up out of its limestone vent. The boil was visible yesterday and after I made the offering to the naga, it seemed like the spring sent out a really strong ripple in my direction. I imagined that the naga might have been coming out to receive its gift. Some people can see nagas, but I'm not one of them. I take their existence on faith, because I trust my Buddhist teachers and they've told me that these half-humanlike, half-snakelike creatures often guard treasures that can be hidden in sacred springs and trees.

After I left the water, I wandered around the edge of the spring and took some photos. When I got home and had a chance to look closely at those pictures, I could see that the play of light from the rising sun had etched shapes on top of the water in the spring. Some of the shapes appeared to me to evoke the energies of Kuan Yin or Tara. Others looked like dancing dakinis or nagas. One reminded me of Ogyen Trinley Dorje, the 17th Gyalwang Karmapa. Another one reminded me of Guru Rinpoche (Padmasambhava), who--as legend and/or history (take your pick!) have it--tamed the wild spirits of Tibet and helped to solidify Buddhism as that country's predominant religion.

This wasn't the first time I've seen what I interpreted as "a being" in the water; see the photo at the top of this blog entry!

So although I *KNOW* that the shapes in my photos from yesterday were simply lights on the water at the spring, that doesn't take away their magic. There's a part of me that resonates strongly with this magic of the natural world that surrounds us; I understand why indigenous cultures and other cultures have viewed our world as alive and imbued with magical energies--because it is!

In my mind, at least, science and magic coexist peacefully. The interplay of the two--these questions about "What is real?" and "What is magic?"--lie, for me, at the heart of the wonder of this world.

I hope you enjoy my interpretations of what my camera captured, below.

First, Kuan Yin appeared (look at the light on the water just to the right of the center of the photo). 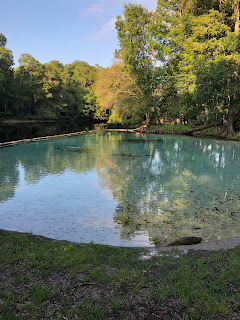 Then I saw the Kuan Yin shape as Tara, a bodhisattva in the Tibetan Buddhist tradition. 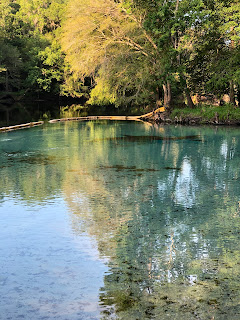 This next shape evoked His Holiness Karmapa. 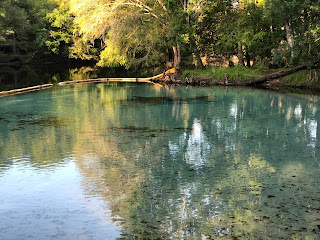 And here is Guru Rinpoche! 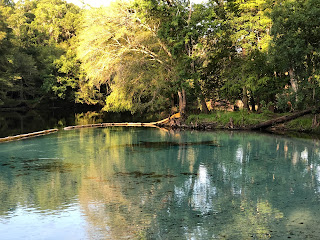 There were several photos that had lights dancing on the water, like dakinis; I think of the squiggly lights as evocations of the naga spirits. 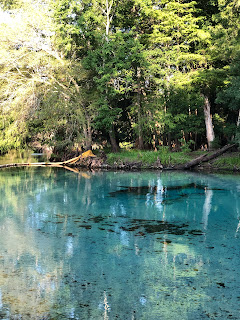 And so I wonder:  If we see figures or objects in nature, are the images we project upon such things culturally conditioned, or could they have another source, perhaps past-life connections in our mindstreams? The anthropologist Marlene Dobkin de Rios surmised that the visions people experienced while taking hallucinogenic drugs were culturally conditioned. I wasn't on drugs at the springs--I haven't taken any hallucinogens in many years--but I would surmise that other types of visions could also be culturally conditioned, and I've certainly had enough exposure to Buddhist iconography and beliefs that I can't discount that "cultural conditioning" for the shapes my mind imposed upon these lights on the water.

The real lesson here (if there is one), I think, is that we humans are hard-wired to interact with Mother Nature who surrounds us. How that interaction takes place depends upon many things, but our spiritual orientations and beliefs are a big part of that--of how we relate to what Karmapa calls "the container" within which we are "the contained."

Is the natural world a "real" commodity to be exploited for profit? Or is it a "magic" or even sacred connection that's essential to life? Or something in-between? Or something else entirely?

For the Tibetan Buddhists with whom I study, water is Mamaki, one of the five female Buddhas (image by Eleanor Mannikka). 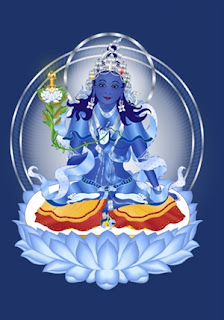 How does your spiritual tradition view water?