Note:  I originally published this post on March 24, 2009, but I took it down at Janis Nelson's request because she was not happy with one of my other posts that appeared on this blog; that other post was not about her. I have today learned that Janis died last year (2020) so I am re-posting what I wrote, because I believe that she has an important story that should be remembered. The website mentioned at the bottom of the article is no longer operational and I don't know if Janis ever felt as if she had received a "big victory in the city of the young." I do know that I am a wiser person for having known her. 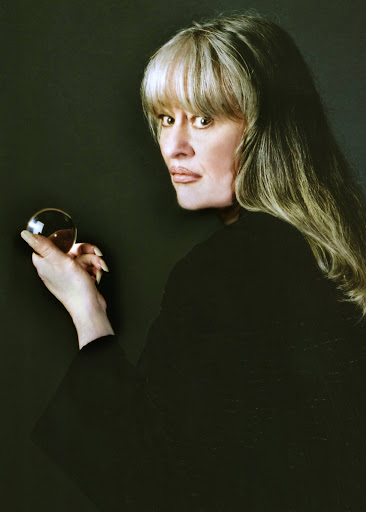 "...Morgan le Fay was not married, but put to school in a nunnery, where she became a great mistress of magic." -Malory, Morte d'Arthur

So begins one of my favorite novels of all time, Marion Zimmer Bradley's The Mists of Avalon—a riveting re-telling of the Merlin and Arthur legends from the point of view of the women involved.
The "mistress of magic" quote has always reminded me of my friend Janis Nelson. I first met Janis in the early 1990s, when I heard about her from a co-worker. I have been fascinated by things psychic and occult since I was very young, but was actively discouraged from pursuing these interests by my parents, who wanted me to be grounded in the "real world." (I'm still trying to figure out where and what that is, by the way.)
I had two aunts and a maternal grandmother who encouraged my interests, however, but I did pick up a healthy dose of skepticism somewhere along the way, so I never actively sought a psychic reading until my friend Sheri mentioned that she and her mother knew a psychic who did not advertise, but did all her business by word of mouth. I immediately decided that was the person I wanted to see—Janis Nelson.
I'm betting that if a Hollywood screenwriter had written a script about Janis's life, it would have been rejected by every major studio because no one would have believed it. Born and raised on Gallows Hill in Salem, Massachusetts. Largely self-taught in astrology and the Tarot while living a hermetic existence outside Woodstock, New York. Spirited away to Palm Beach, Florida, where she became the city's first licensed psychic and began reading for the rich and famous. Thrown into the middle of one of the sleaziest, most publicized private divorces in history, that of Peter and Roxanne Pulitzer. Libeled in numerous major media outlets, including Time magazine. Lost her reputation, her possessions, her livelihood. Sued for libel, but had her case thrown out of court because of mistakes in its presentation. Went from waltzing with Pavarotti at The Breakers to wandering barefoot around Gainesville and eating from dumpsters.
One day, shortly after her libel case had been thrown out of court, Janis went to the mailbox to find a flyer for a new series by Time-Life Books: "Mysteries of the Unknown." The first volume? Psychic Powers.Up until then, books about psychics had been hard to find. Today, they're everywhere.
Janis rebuilt her clientele, slowly, over the years, and she has written a book about her experiences—a psychic's eye view of a celebrity divorce. Her writing is unique. But even more than her writing, it's her story that intrigues me, because it speaks to what we as a culture have done now for thousands of years—banished what we don't understand about the psychic and the feminine to the netherworlds of silence and shadow.
Thankfully, things are changing. A psychic in Kingston, New York, predicted many years ago that Janis would have a big victory in the city of the young, a place where the devil lives in a big hole in the ground and the River Styx flows. Just northwest of Gainesville is Devil's Millhopper State Geological Site, a huge sinkhole; just southeast of Gainesville, down by Cross Creek, is the River Styx.
Janis is still waiting for her big victory in the city of the young. In the meantime, she's put up a website you can visit at:
http://janisnelsonpsychic.com/
And in a bit of serendipity, I just noticed that the word of today at www.dictionary.com is thaumaturgy, "the performing of miracles or magic." Hmmmmm....
Posted by A Word Witch at 3:34 PM