Death of the Blue Springs: A Horror Movie 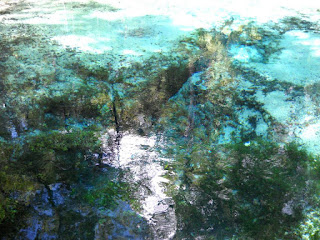 Could it happen here?

A Young Woman stands with an Older Man on the bank of a beautiful clear blue freshwater spring. Other people—the Young Woman’s classmates on a geology field trip with their college instructor, the Older Man—are milling around at some distance. Young Woman and Older Man are silently gazing into the depths of the spring, looking pensive.

“You know,” Older Man says, “if these springs ever get polluted, it will take Mother Nature hundreds of years to clean them up.”

Young Woman laughs at the absurdity of the thought.

Anthropologist:  An intelligent, beautiful and intuitive young woman who is grounded in an unidentified spiritual Asian path (Taoist? Buddhist?). A specialist in political and corporate power structures, she is trained to see the interconnections (not always obvious to others) between the environmental, economic, spiritual, scientific and political sectors of a society. She’s introverted but not shy and is unafraid to ask tough questions or to speak out against injustice directed toward other people or Mother Earth.

Scientist:  A Ph.D. at the local university who is an expert on freshwater springs and is documenting the reasons for their decline. He has identified a pattern of failing springs on the local river that alarms the Anthropologist and gets the attention of the TV Reporter, but he is ignored by Officials and most of the public. (Doesn’t every good horror movie begin with a scientist who is being ignored?)

Artists:  A painter and a photographer who have, intentionally or unintentionally, depicted the decline of the springs over years of bad political and environmental decisions.

Lawyer:  A brilliant, handsome law professor who is also a member of the board of directors of a local springs defender group. He has researched state and federal laws extensively and leads a small statewide “fringe” effort to change current laws. He has received anonymous death threats that he suspects come from some major industrialists.

Writers:  A journalist who covers big environmental stories for a large metropolitan newspaper and a rural resident who writes books set in the Springs Heartland, similar to the ways that Marjorie Kinnan Rawlings wrote about Cross Creek and Marjory Stoneman Douglas wrote about the Everglades.

TV Reporter:  A springs defender at heart, the Reporter uses every opportunity to bring the story of degrading springs to the attention of the public.

Cave Divers:  A man who began cave diving as a youth and the woman who is his video production partner. By filming, mapping, writing and lecturing about the underground aquifer that feeds the springs, they try to raise public awareness about the connections between springs, aquifer and drinking water supply.

Officials:
·      Chairman of the Board of the local water management agency, a businessman with a string of ethics complaints about his conflicts of interest.
·      The Executive Director of the same agency, an agriculturalist who has forged good communications with and seems sympathetic to the springs defenders.
·      The Secretary of the State Department of Environmental Permitting, who walks a tightrope between his business and political supporters and the springs defenders. A supporter of the Governor.
·      The Governor, who poses as an “environmentalist” solely to win votes and whose actions give lie to that label.
·      Two state Legislators who have crafted laws that create the illusion that the State is saving the springs and who take steps to keep local municipalities from enacting stronger springs protections.
·      County Commissioners and their Lawyers who, when approached by the Anthropologist and her friends, prevent local legal changes that might help to save the springs.

After some years away, an Anthropologist (the Young Woman in the opening scene) returns to take a higher education teaching job in the mid-sized town where she spent her college years. The town is centered in an area called the Springs Heartland, the largest concentration of freshwater springs on the planet.

On a weekend visit to go swimming, the Anthropologist discovers that the area’s blue freshwater springs have begun to turn green. She chances to meet two Cave Divers emerging from the spring and begins to question them. She becomes very concerned and because she is trained to look at the holistic “big picture” of social situations, she begins to investigate what has caused the greening of the springs.

In her spare time, the Anthropologist meets with the Scientist, Artists, Writers, the TV Reporter and Officials who have various roles in defending the springs and in maintaining water quality and water supply. When she attends the meeting of a local nonprofit springs defender group, she meets a sympathetic Lawyer with whom she develops a romantic relationship.

The Anthropologist also attends state water management agency and legislative delegation meetings. She interviews state and local Officials. With coaching from the Lawyer, she discovers how laws are written, at the expense of the springs, to support the wealthy that hold political power. Banding together with the Lawyer and other friends she has made while doing her research, she mounts effort to hold Officials accountable and to change the laws. Those efforts are blocked at every turn and she finally realizes that the Officials who hold power are completely unwilling to make changes that might save the springs.

Just as the Anthropologist begins to realize the futility of her efforts, the springs go dry, saltwater intrudes into the increasingly polluted aquifer and the water becomes poisonous for drinking or irrigation. As large numbers of people get sick, the local health care system collapses alongside the water supply. These failures lead to a crash in the local economy, after which public chaos and an increasingly violent societal breakdown rapidly follow.

To save herself and to be able to share at the national level what she knows about the causes of the collapse, the Anthropologist—accompanied by a few friends—makes a daring escape from the chaos and destruction that have been caused by ignorance and greed.